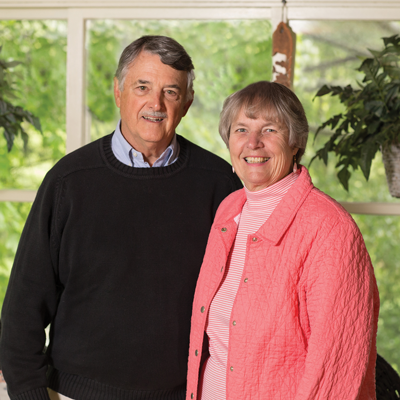 Barbara and Mike Powers are long-time supporters of Southwestern Vermont Health Care (SVHC), and it is one of three lead beneficiaries of their charitable remainder trust. In anticipation of Mike's retirement from his career as an Independent Insurance Agent, he and Barbara decided to consult with a professional Financial Advisor to gain an overview of their financial future and to map a path that would provide a secure and comfortable retirement income. In this exploration, they were encouraged to also consider making a provision for future charitable contributions in the form of a planned gift.

This exercise pointed to the possibility of establishing a charitable trust that, upon their death, provides named beneficiaries with a financial payout and which, during their remaining lifetime, provides them with some income. After exploring several avenues, they narrowed their search to a NIMCRUT (Net Income with Makeup Charitable Remainder UniTrust.) This type of trust, quite simply, enabled them to avoid capital gains on accelerated values in their investment portfolio by gifting selected investments to the trust and, at the same time, to receive a substantial tax credit for making an eventual irrevocable contribution through the trust to several designated beneficiaries.

Guiding them in ultimately selecting and setting up this type of trust was their financial advisor, tax attorney, and accountant.
As Trustees, Mike and Barbara retain control over the various investment vehicles available to the trust as well as the ability to modify or change the designated beneficiaries and the percentages of the ultimate payout after their deaths. To them, this is a most satisfying way of being confident that they can continue to provide support to various charitable beneficiaries.
Barbara and Mike feel the quality of health care that SVHC provides to the community is quite extraordinary, and they could not be happier with the choice to include SVHC as a beneficiary of their trust.